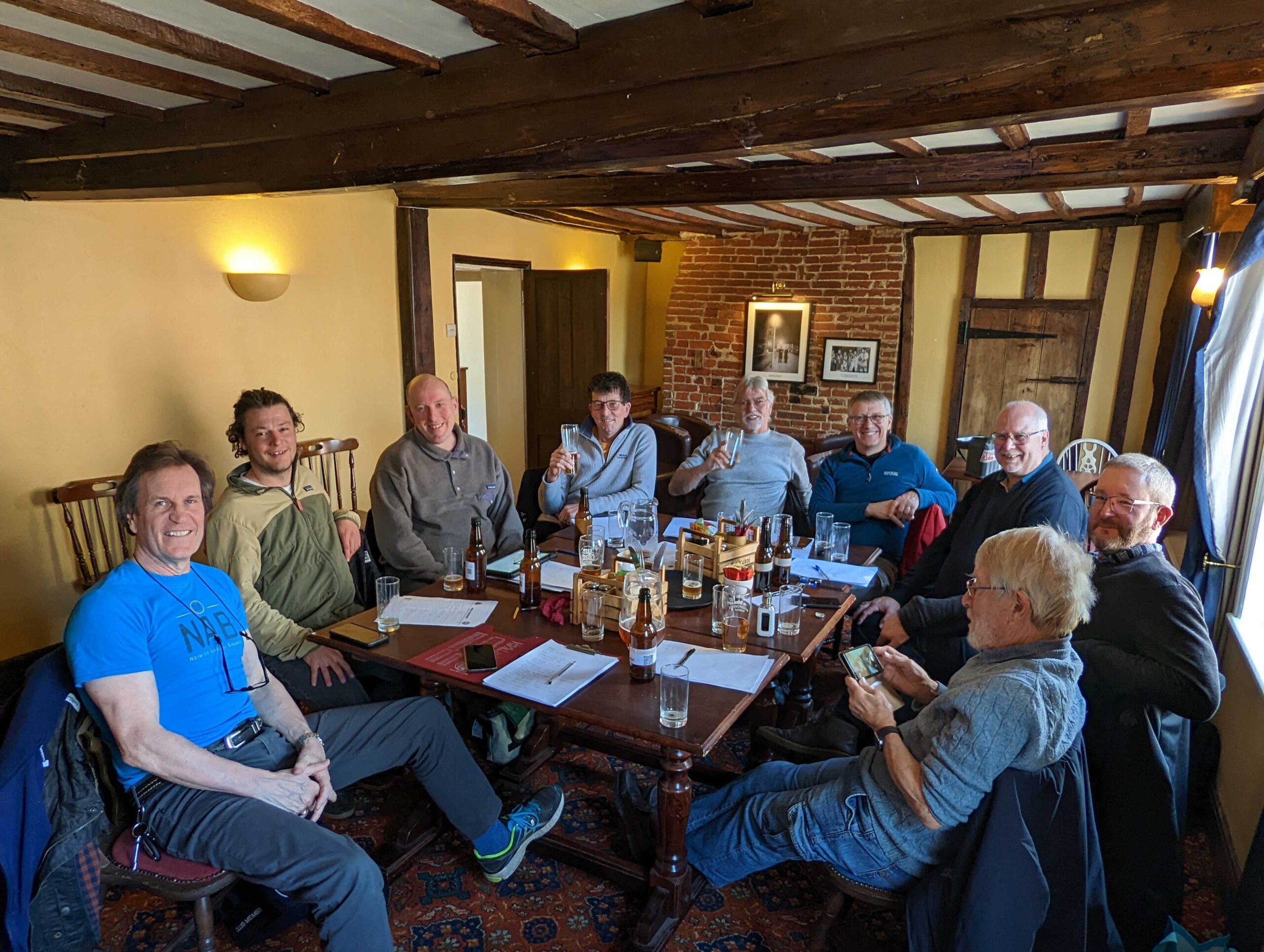 The day started with a little wobble. The chef hadn’t turned up, yet!

Onwards and literally upwards, we assembled upstairs and introduced ourselves to our star guest Dan Gooderham, now Head Brewer at Adnams. When it was his turn, Dan mentioned his start in brewing life came about because his parents owned a brew pub. He was brewing on “big” kit and home brewing before making the rather easy decision to go up to Heriot-Watt to do his degree in brewing. He spent a year at Fullers before Fergus, who had him on his radar, offered him a job at Adnams. I think he said he has been there 11 or 12 years now.

Starting with the Golden Ale Challenge BJCP score sheets were distributed with Dan joining in (hard marker :-)). 7 offered up but we decide Steve P’s was nowhere near and was left out of the final judgement.

Results were ranked by place rather than decided on points, to smooth out judging variation:

To our delight Chef did turn up and lunch was taken at 1:30 to ensure the GAC had time to be judged.

After lunch, Dan held an in-depth discussion of Broadside, and how to brew it. The first snippet of interest is that this year is the 50th Anniversary of it being brewed for the first time. It was originally brewed to recognise the Anniversary of the Battle of Sole Bay, off the coast of Southwold. Originally brewed for bottle only, the cask version was introduced in the 80’s. It was interesting to learn that it is a firm favourite in the brewery, with the tasting panel leaving it till last. The “game” they play is to try Broadside at various stages of development and then “guessing” how old it is.

When the brewery makes this, they brew it to high gravity then liquor back. (see notes posted to Slack for more detail – added these notes below for ease of navigation). A key element to the beer is the pursuit of esters, by allowing the beer to free rise to 22 over 24-36 hours. Less oxygen than usual is part of the process. Water treatment is chloride forward, but Dan warned against trying to emulate their water. It has a massive 300ppm of Sulphate. He suggested bottling fairly quickly, at a degree or two above FG (1.017) so it has plenty of time to condition and scavenge any oxygen. Or ferment right out and prime.

Final tip: “It’s all about the esters”.

The follow up Q&A revealed a number of snippets, which I forgot to make notes about. One I do remember is that he said that on paper/technically double decoction is considered a waste of time by most UK brewers but in the taste, if you want a cereal flavour, do it.

Maybe one of the most intriguing comments was that when they make their Lager it is all English ingredients and the house yeast! Dan confessed it was more of a Kolsch really.

The AOB’s were a Vienna Lager from Keith, that to his surprise had decocted, even though he swore he wouldn’t do it again. The all round approval suggested he should keep it in the act, sorry Keith. 🙂

James fared slightly less favourably with his own version due to a phenolic note. Despite that Dan really liked the Beer underneath it. A similar problem afflicted his Golden Ale, a rare lapse in his standards.

Martin ran through previous competition success for the region and then mentioned upcoming competitions and Festivals. I have asked him to post this info and Slack but highlights are:

NOTE: UK Nationals and Welsh Nationals not taking place in 2022.

Just before the close there were pictures taken, Dan wanted one for the brewery and we got a couple for social media/website etc. We of course paid for Dan’s lunch but he seemed to be entertained thoroughly enough by the day itself. Top bloke, and agreeing to be a Judge in the ACB competition is a real bonus.

Finally, and particularly exciting for the NAB Festival, Dan has suggested that the tutored tasting by him and Fergus should be of their 150th Anniversary collaboration brew with Sierra Nevada. This information is embargoed until May 4th when it will be officially announced please don’t let it slip out. That my fellow brewers will be some treat. Tickets will be at a premium. You know what to do. NAB will be announcing on the 4th May to allow the general public to  be in on it. You have till then to secure a place.

[RS added] Notes taken by Keith Bailey (originally posted on Slack and mentioned above) for brewers to refer to:

Overview of what we learnt today:

Other notes of interest: